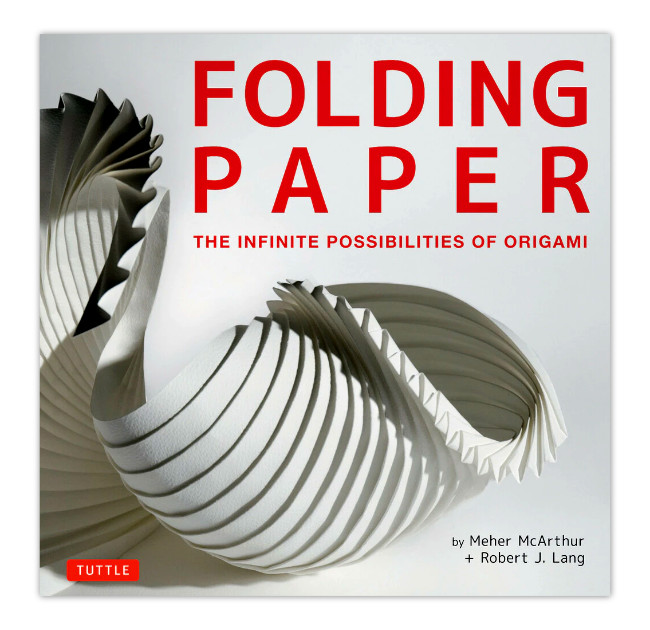 Robert Lang has co-authored a new book with Meher McArthur – Folding Paper – The Infinite Possibilities of Origami, on the evolution of Origami from crafts to a fine art. There are no diagrams in this book though and this book is meant to showcase the evolution and styles in origami of various master folders from around the world. The images of their work Is stunning and this will make a good coffee table book or an entry into the library as part of your collection.

Sara Adams’ new Instructional Video on Carmen Sprung’s Star Helena is the latest in her series. It’s amazing to see how she can juggle a new born baby (who is so adorable!), work and Origami. Way to go, girl! 🙂
This star design of Carmen Sprung’s is folded from a single piece of paper – preferably duo-colored to take advantage of the color changing. You can use this as a DVD / CD cover or just simply as a decoration.

Maria Sinayskaya’s rendition of Carla Onishi de Godoy’s Parati Prata Star is a simple design (the diagrams are shared) allowing folders to take advantage of color changing feature to make a pretty geometric patterned model. This is a design which is simple and quick to fold and you can use just about any kind of paper.

David Martinez’s Scholz Star is another pretty beautiful design for which he has generously shared the photo diagrams to. He has been on a roll in designing lately and each of his designs betters his previous. His backlit tessellation designs are also popular spelling out intricacy and sophistication as always.

Nicolas Terry has also got some new colors in his awesome Washi paper collection. These are the 3 Sample Deluxe Washi RED + BROWN + BLACK which is currently available in his online origami shop. The paper is truly magnificent and the foil backed surface on one side makes it easier to shape the models when folding. You can buy this pack of 3 sheets or packs of certain colors, too. Currently only Brown, Red and Black are available at the time of writing this post.

Folded by Himanshu Agrawal and designed by Richard Wang, these Origami Geckos are pretty cute and might I add, easy to fold, too. Himanshu has done a lovely job of using contrasting colors, shaping and photographing the models, which are of course, folded by him. If you look though the comments on this Flickr photo, you will see the link to the instructional video for these geckos. Have fun folding them!

Finally, this is one picture I simply had to share with you all. Folded by EyalR who is known for his complex folding and perfect renditions of complex work, these Grim Reapers are simply out of this world! He has used 2 kinds of paper to achieve the black cloak and white face combination and has shaped this model really well. This is a design which was published in Leyla Torres’ Origami Spirit a few days ago. I absolutely love the ‘petals’ of this box and the fact that I can use it to store tit bits and with Easter right round the corner – Chocolate Eggs! 😀

I have folded a container or box origami design after simply ages and that is only because I am not usually a fan of the four sided models. However, this particular design caught my eye and I simply had to get busy with it.

I have used square duo-colored tant paper measuring 15 cms to fold this pretty container. However, in the instructional video you will see that Leyla Torres starts off with a slightly larger 18 cms square sheet of paper. I would recommend not using a square any smaller than 15 cms coz this would make the end model really small. A 15cms square sheet of paper results in a 4.5 inch sized end model / container.

You can choose between single side colored or duo-colored and experiment with other kinds of paper, too. Avoid really thin / filmsy paper such as tissue paper, as you need a slight thickness to the paper in order to have the ‘petals’ standing out as you see in the image above.

Leyla Torres has recorded a very good instructional video on her origami blog – OrigamiSpirit – and shared it with all her readers. She goes through each of the steps in a detailed manner and you will find the video very easy to follow.

Now, all I have to do is go get some fancy Chocolate Eggs for Easter and I am all set! 🙂

A Happy St. Patrick’s Day to all!

This is my first fold after my vacation and I am really happy to get back into the routine of folding. This is a design which is a modification of Paul Jackson’s cube – it has a ‘dent’ like pocket in the corner of the cube in order to be able to stack them up.

This is fun to fold and quick, too. However, stacking them up requires patience and of course, a flat surface.

Paper to use:
In the instructional video you see below, they use 15cm sized square paper for each unit, with 6 units being required to make 1 cube. What I used instead is 7.5 cm square sheets of Kami (you can also use Post Its) to fold the 6 units making up 1 cube. In this manner, I used 18 sheets to fold 3 cubes. You can fold any number of cubes and the challenge here is to see how many you can actually stack up without having them toppling over! Sounds like fun, eh?

How to fold:
You can find the instructions to this model in the book Building with Butterflies: How to build stunning sculptures from simple units made by folding paper, by David Mitchell. EZ Origami has recorded a very well explained instructional video on folding this model, too. You can find it below:

I have folded my rendition using the instructional video and have used green colored sheets for all units in honor of St. Patrick’s Day. 🙂

Have a great weekend!

Compliments of the Season to all of you!

I have made it a point to have an Origami Star as my Christmas Tree Topper for the last couple of years and have continued with that for this year, too. I usually select a 3D model of a star, and mostly Modular, so that I can place it on the top most leaf / branch sticking out of my tree.

I chose Tadashi Mori’s Kusudama Sparkle to adorn my tree for this year. This is quite easy to fold and it has a pretty solid assembly. I actually found this a lot easier to assemble as compared to my last year’s assembly of Paolo Bascetta’s Stellated Icosahedron which I made for my tree in 2010.

So, back to Tadashi Mori’s Sparkle Kusudama… This is an ingenious model which has a very interesting folding sequence. The best rendition, in my opinion, would be with pearlized or tissue foil paper which has a slight metallic shimmer to it.

Paper to use:
The size of the paper really depends on how large you would like your finished model to be. I the instructional video shown below, Tadashi Mori uses paper measuring approx 9 inches in size – square shaped and single side colored.

I used Pearl Tissue-foil Paper – 40×40 cm (15.75″x15.75″) from Nicolas Terry’s shop. I wanted a shade of dull gold for the star and hence this choice. I cut 15 squares measuring 8 inches each from these sheets of paper (I used 2 in all), and then as the instructions in the video mentioned, cut each of these 15 into half… making it 30 rectangular sheets of paper in all.

If you would like a brighter star, you can choose the Gold colored tissue foil paper from Nicolas Terry’s shop. He even has a silver colored option in case you are looking out for that to match the decor of your tree.

How to fold the Sparkle Kusudama:

Tadashi Mori’s instructions are clear and detailed. Steps for assembling the star are also shown properly and he even uses markers to show the various folds, so you will definitely find it easy to follow.

Hope you all had a wonderful Christmas, too!

This is a design diagrammed and shared by Evi Binzinger on Flickr. This design is a lot easier than other Rose designs out there, but there is effort required to get the curves for the petals especially – as with all origami floral designs which emphasize on the beauty and bloom of the flower.

I found this design quite easy to fold and shape – the folding sequence is easy to follow and the instructions are very clear. You can combine this design with a design for leaves by other origami designers to get a prettier look, too.

Paper to use:
The designer suggests the use of foiled paper, wet folded paper and duo colored paper for folding this model. I used 15cm sized square sheet of duo colored tant paper which I purchased from a quaint little Japanese shop in Little Tokyo, LA, a few weeks ago.

How to fold this pretty rose:
The designer – Evi Binzinger – has taken the trouble of diagramming the folding sequence for this design and has also generously shared them on Flickr.

Have a great week ahead!